By Eric Benson ’18
Originally published in the Press Herald 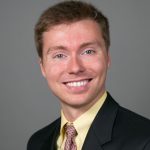 In 2017 I noticed recurring themes, particularly throughout progressive and mainstream discourse, that centered on a narrow conception of the victimized immigrant who is defined by how she is subjugated by Donald Trump and the policies of his administration.

Undoubtedly, 2017 was a hellish year for many immigrants and refugees because of the Trump administration’s efforts to roll back their legal protections. What gets lost in these narratives, however, is that immigrants and refugees are successfully fighting back every day at the individual level. My goal here is to reflect on what I’ve witnessed as a student attorney within the University of Maine School of Law’s Refugee and Human Rights Clinic to challenge the perception of the immigrant as defenseless and victimized, and restore an understanding of the [personal] agency that these individuals carry.

Last year was a complex one in which to be a student attorney in the clinic, working with clients who are seeking immigration benefits. At the wide-scale level, immigration attorneys, students of immigration law and, more importantly, immigrants themselves who are fighting to come to or remain in the United States, ended up navigating unprecedented levels of chaos and hostility.

From the botched implementation of a racially motivated travel ban to the anxiety-inducing attempts to rescind forms of prosecutorial discretion, including, most notably, Deferred Action for Childhood Arrivals, the year was truly a nightmare for many immigrants and refugees. But not all. As a law student and as a student attorney, I had the privilege over the course of the year of witnessing small-scale immigration victories and moments where immigrants and refugees exercised authority over their own lives in ways that gave me hope.

One way that immigrants and refugees are fighting back against a system that is stacked against them is by employing their raw intelligence and skill – one of the few things the administration cannot take from them. 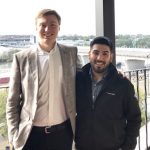 Last month, while volunteering through the Maine Law clinic with the Laredo Project in Laredo, Texas, I watched a detained immigrant in an orange jumpsuit sitting on a folding chair in the detention center’s “library” taking notes during a Know Your Rights presentation for potential asylum seekers. Herself a lawyer, she was fleeing violence in Central America and made use of the few tools at her disposal in the detention center – a pencil, a piece of paper and her own professional experience – to learn what she could about U.S. asylum law in order to defend herself.

I also met with folks in 2017 who chose to beat the Trump administration to the punch by making choices in their own lives that would protect them in case they became subject to removal. During the summer, in Boston, I met with a young woman from Haiti who had the foresight to predict that the Trump administration would soon revoke the temporary protected status that has saved her and thousands of other Haitians from deportation since 2010.

Preparing for the Worst

Sadly, her prediction was correct. Nevertheless, she made decisions well in advance of the announcement that, in the long run, she believed would ultimately protect her if she was forced to leave, such as forgoing a semester of college and saving money by working full time instead.

And, in 2017, I witnessed one of the greatest antidotes to adversity: resilience. In Portland, I’ve had the pleasure of representing a survivor of unthinkable trauma who, along with thousands of other individuals who are seeking asylum affirmatively, is getting up every day and providing for her young son after waiting years for an hours long interview with an asylum officer who may grant her the opportunity to remain in a country where she feels safe.

In a year saturated with high-profile legal challenges to the Trump administration’s immigration policies, some more successful than others, we should also take comfort in the fact that refugees, immigrants and their advocates are fighting harder than ever and still winning individual cases – the victories you don’t hear about. Only weeks after reading during the fall that approvals of applications for special immigrant juvenile status have “dropped sharply” under Trump, I found out that a young woman represented by my law school clinic was granted this status. This gave me hope.