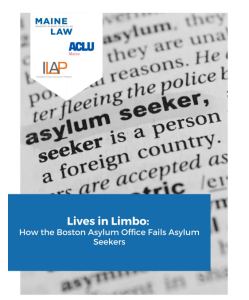 “The failures documented in the report are not unique to the Boston Asylum Office. The discriminatory procedures in Boston are a small window into the larger systemic issues within U.S. immigration policy,” said Anna Welch, clinical professor and founding director of Maine Law’s Refugee and Human Rights Clinic at a press conference to share the findings and recommendations of the report. “As the global refugee crisis continues to grow with the crises in Afghanistan and Ukraine, it is imperative that refugees are rightfully protected pursuant to U.S. law and policy as they seek asylum in the United States.”

The report Lives in Limbo: How the Boston Asylum Office Fails Asylum Seekers finds the Boston Asylum Office fosters a culture of distrust toward asylum seekers, which violates their due process rights and the United States’ legal obligations. The report finds evidence of national origin and language bias, as asylum seekers from countries in Africa and the Middle East and those who do not speak English are less likely to be granted asylum. Additionally, the report finds asylum officers inappropriately focus on minor inconsistencies as proof of an asylum seeker’s lack of credibility and as justification for denying asylum.

“When I fled Syria with my wife and applied for asylum in 2013, I sought out a new life to leave behind the violence and fear of persecution under the Assad regime, which killed and imprisoned

some of my closest friends. Instead, for almost a decade, I have experienced a different type of violence under the U.S. asylum system,” said Dr. Basileus Zeno, a Syrian refugee and report co-author, and Karl Lowenstein Fellow and Visiting Lecturer in Political Science at Amherst College. “This violence takes the form of adversarial interrogations, rejection or omission of evidence submitted to support my case, and constant denial of my life during multiple asylum interviews. Here, I was treated either as a terrorist or a fraud. The unbearable treatment from the U.S. asylum system sought to take away my humanity and ability to make a life for myself and my family.”

Dr. Zeno continued, “Unfortunately, based on my lived-experience and ethnographic fieldwork with asylum seekers and refugees, I found that the asylum process in the U.S as a whole has been weaponized as a form of legalized collective punishment against ‘racialized others.’”

The report finds internal office pressures exacerbate the culture of distrust at the Boston Asylum Office. Asylum officers are under unnecessary control and pressure to write decisions that correspond to their supervisor’s opinion or viewpoint, which often result in issuing final denials or referrals to immigration court. Further, the Boston Asylum Office’s high referral rates are exacerbated by the unrealistic workloads and timelines that it assigns to its asylum officers. These pressures create an intense work environment with time constraints, overwhelming caseloads, and high rates of burnout that incentivize referrals rather than granting asylum.

“Right now, asylum interviews happen behind closed doors. There is little accountability when asylum officers make the wrong decision, or fail to give asylum seekers the full protection of due process they deserve,” said Anahita Sotoohi, legal fellow at the ACLU of Maine. “This report shows that this lack of transparency hides an asylum process that is confrontational, riddled with bias, and more focused on finding fraud than the truth. The recommendations we have put forth are necessary to create the legal asylum process refugees are entitled to.”

“The current trends at the Boston Asylum Office mean that even well-documented and thoroughly prepared cases are increasingly referred to the adversarial environment of the immigration court.” said Jennifer Bailey, Senior Project Attorney at the Immigrant Legal Advocacy Project. “The human consequence is that bona fide refugees are being sent before a judge to plead for protection when they could have and should have been granted asylum in the first instance by the Boston Asylum Office. The long case delays and prolonged family separation compound trauma and erode mental health. The recommendations in our report are aimed at ensuring asylum applicants receive the fair, legal, and timely adjudications as contemplated under our laws.”

The Boston Asylum Office is at the center of immigration in New England, processing claims for refugees in Massachusetts, Rhode Island, New Hampshire, and Maine. From 2015 to 2020, the Boston Asylum Office approved a mere 15 percent of asylum applications compared to the national approval rate at 28 percent. The approval rate in Boston plummeted to 11 percent in 2021, while the national average remained at 27 percent. To date, there has been no adequate explanation of why this approval rate is below average and what is being done to address this failure.

The lack of explanation and these alarmingly low numbers prompted RHRC, ACLU of Maine and ILAP to file a Freedom of Information Act (FOIA) request in 2019 to understand this disparity. Following the government’s lack of response to the FOIA, a lawsuit was filed against the U.S. government to compel production in November 2020. The report, drafted by law students in Maine Law’s Refugee and Human Rights Clinic in collaboration with the ACLU of Maine, ILAP and Dr. Basileus Zeno, was created by analyzing documents and data received from the FOIA lawsuit, as well as hours of interviews with asylees, asylum seekers, former asylum officers and immigration attorneys.

“Our findings became readily apparent after we met with all of the courageous interviewees, analyzed the large asylum application datasets, and reviewed the thousands of redacted documents,” said Camrin Rivera, a student attorney with the Refugee and Human Rights Clinic at the University of Maine School of Law. “Given the stakes, what became even more obvious from our work on this report was that the Boston Asylum Office needs to make some major changes to ensure that all asylum seekers are guaranteed a fair adjudication of their asylum case.”

A recording of the press conference can be viewed here.