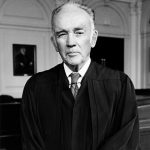 This October, the University of Maine School of Law is planning a special two-part program celebrating the extraordinary life and legacy of the late Judge Frank M. Coffin in honor of his centennial year. The program of events will focus on the Judge’s own life and his substantial contributions to the public good.

The two-day program will begin on the evening of Thursday, October 17, with the 2019 Judge Frank M. Coffin Lecture on Law and Public Service at the Portland Museum of Art. The Lecture will be presented by the Judge’s biographer, Dr. Richard J. Maiman, Emeritus Professor of Political Science at the University of Southern Maine. The program will continue on Friday, October 18, with a panel discussion at Maine Law. Former Coffin Clerks and Coffin Family Law Fellows will discuss their diverse public interest experiences and Judge Coffin’s impact on their careers.

“The University of Maine School of Law is honored to host the centennial celebration of Judge Coffin’s life and legacy,” said Maine Law Professor and former Dean Peter Pitegoff. “The Judge was an inspiration and mentor to me, as he was to so many others in Maine and throughout the nation.”

Now in its 27th year, the Coffin Lecture honors the late Judge Frank M. Coffin, longtime federal judge on the U.S. Court of Appeals for the First Circuit, former member of Congress, renowned leader and mentor in public service, and beloved friend of Maine Law.

Additional information on both programs is below: 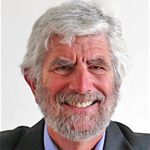 Dr. Richard J. Maiman is Emeritus Professor of Political Science at the University of Southern Maine and the biographer of Judge Frank M. Coffin.  After receiving his B.A. from Lake Forest College and his Ph.D. from Brown University, he taught political science for 39 years at the University of Southern Maine, specializing in American politics, the judiciary, and constitutional law.  He is widely published in political science and law journals on subjects such as mediation and human rights lawyering. His book, Divorce Lawyers at Work: Varieties of Professionalism in Practice, co-authored with Lynn Mather and Craig McEwen, was cited by the American Political Science Association as the “best book on law and courts” published in 1991.

Professor Maiman is a former president of the ACLU of Maine and a former chair of the Maine Supreme Court’s Advisory Committee on Judicial Responsibility and Disability. In 2011, he received a Fulbright Fellowship to teach and do research in South Africa. He is a Visiting Fellow at the Human Rights Centre of the University of Essex in the UK and an Extraordinary Professor at the Centre for Human Rights at the University of Pretoria in South Africa.

He is currently completing a full-length biography of Judge Coffin.

A panel composed of former Coffin clerks and Coffin Family Law Fellows will discuss their diverse public interest experiences and Judge Coffin’s impact on their careers.

Both events are free and open to the public, but registration is required. Please register at www.mainelawcommunity.org/2019-coffin or 207.780.4915.