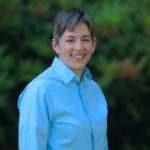 Joy Naifeh, a 2018 graduate of the University of Maine School of Law, recently published “Reinterpreting the Authenticity of Reconstructed World Heritage Properties for the Twenty-First Century” in the DePaul Journal of Art, Technology & Intellectual Property.

The article was initially developed as an independent writing project with Professor Patty Gerstenblith during the fall of 2017 while Joy was a visiting student at DePaul University College of Law’s Center for Art, Museum & Cultural Heritage Law. Joy has a Master of Arts in Historic Preservation Planning and was keenly interested in how the United Nations Educational, Scientific and Cultural Organization (“UNESCO”) planned to respond the targeted destruction of properties and sites on the World Heritage List by armed militants such as the Islamic State of Iraq and the Levant (“ISIL”), also known as ISIS.

Of the criteria upon which nominations to the World Heritage List may be based, “outstanding universal value” (“OUV”) and “authenticity” are central to Joy’s paper. OUV is a list of standards, at least one of which a property must meet to exhibit its common importance to all humanity. Additionally, properties must also be authentic. Authenticity, in short, means that properties should not be false or copied. They should be genuine and original to the period(s) of significance named in the property’s nomination, because this is how the property accurately represent specific historic periods to later generations. Based on this traditional understanding of authenticity in the World Heritage context, should a property be destroyed and subsequently reconstructed, it is no longer authentic and has lost its OUV, thereby rendering it ineligible for the World Heritage List. Joy wondered what effect, if any, the unprecedented amount of purposeful destruction undertaken by armed militants had on this rationale.

When discussing the project, Joy had this to say: “It seemed to me that long-standing arguments against reconstructions had to give way in the 21st century due to recent events, because how could we let the militants’ campaign to erase history win? What I found is that the enforcement of authenticity in World Heritage properties over the years was not uniform. Then in the 1990s, the theoretical understanding of authenticity began to be challenged. Together with the militants’ destructions, these have led us to the point where there is no question that World Heritage can be rebuilt and remain eligible for the World Heritage List. This is true whether destroyed on purpose or on accident, such as in the case of Notre-Dame de Paris, a tragic event which occurred after my paper was published.”

Below is a brief synopsis of her article, and the full article is available on DePaul’s website, HeinOnline, Westlaw, and LexisNexis.

Joy is currently an associate with Woodman Edmands Danylik Austin Smith & Jacques, P.A. in Biddeford, Maine. She is also a member of the City of Portland’s Historic Preservation Board.