Justice For Women Lecture Series: The Struggle for a More Equal World – Why It’s Essential and How We Can Win

The JFW Lecture Series, presented by the University of Maine School of Law, brings speakers to Maine each year to discuss their work and strategies to promote justice for women and girls. Maine Law established the series in 2011 with leadership and support from the attorney and civic leader Catherine Lee of Lee International.

The Justice For Women Lecture Fund, an endowed fund, was created with the goal of sustaining the JFW Lecture Series in perpetuity. Supporters can make a gift to the lecture series using our online form.

Join us for the eleventh annual Justice For Women Lecture, presented virtually on April 25, 2022 at 12:00 pm EDT. We are excited to welcome Winnie Byanyima, UNAIDS Executive Director to present her lecture The Struggle for a More Equal World – Why It’s Essential and How We Can Win. The 2022 Justice for Women Lecture will be presented virtually via Zoom. Register for the event here: https://bit.ly/3tNYDIR. 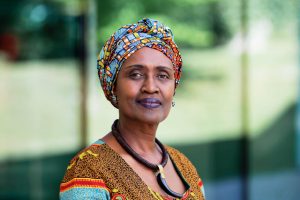 Winnie Byanyima is the Executive Director of UNAIDS and an Under-Secretary-General of the United Nations. A passionate and longstanding champion of social justice and gender equality, Ms. Byanyima leads the United Nations’ efforts to end the AIDS epidemic by 2030. Ms. Byanyima believes that health care is a human right and was an early champion of a People’s Vaccine against the coronavirus that is available and free of charge to everyone, everywhere.

Ms. Byanyima is a recipient of several awards, including an honorary doctorate from the University of Manchester, United Kingdom, an honorary doctorate from Mount Saint Vincent University, Canada, and the 2018 Human Rights and Solidarity among Peoples Prize, awarded by the Latin American Council of Social Sciences. She holds a master of science degree in mechanical engineering from Cranfield University and an undergraduate degree in aeronautical engineering from the University of Manchester.