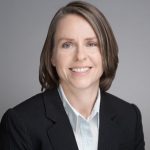 The American Civil Liberties Union (ACLU) of Maine has elected Jodi Nofsinger ’96, an attorney at Berman & Simmons, as president of its board of directors.

Nofsinger has served on the board since 2009, most recently as Vice President and Equity Officer.

“It is an absolute honor to be the newest board president for the ACLU of Maine,” Nofsinger said. “I share this organization’s passion for justice and strengthening the liberty of people in the great state of Maine, and I look forward to continuing the fight for those who need us.”

Nofsinger has a long history of assisting the ACLU of Maine on cases, most notably the groundbreaking victory to secure the rights of transgender students to use the correct bathroom for their gender. She also worked with ACLU of Maine on a federal lawsuit on behalf of an immigrant who was beaten by two Cumberland County Jail guards.