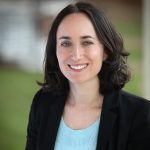 Professor Feinberg joined the faculty at Maine Law in August 2020. She is a nationally recognized expert in family law and gender and sexuality law. She has a proven track record of excellence in both teaching and scholarship. Prior to joining the Law School, she was a professor at Mercer Law School for nine years. She also completed a teaching fellowship at Tulane University Law School, and served as a visiting assistant professor at DePaul University College of Law.