I have been thinking a lot lately about public space and private space. The project I’m currently working on examines privately owned property that functions as public space. This occurs when building owners make a portion of their private property open and accessible to the public, typically in exchange for greater development rights from the city.

But today I want to talk about the opposite situation: the privatization of public space, specifically in the context of one of my favorite pastimes, al fresco dining. Where we live here in Portland, Maine, it’s a sure sign of summer when the restaurants and bars put out tables and chairs on the sidewalks. City regulations require them to keep at least a four-foot passage for use by pedestrians, wheelchairs, and strollers, but that means in many cases half of the useable sidewalk, or more, is being occupied by seating for a private entity. Further, in most instances, only patrons of the bar, café, or restaurant that has put out those tables may sit at them. 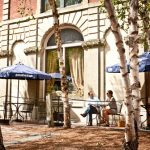 In permitting sidewalk cafes, the city is surely attempting to strike a balance between activating the streets and providing public access to sidewalks. But there is a more fundamental issue at play here: how available should public space be for use by the public? Different norms pertaining to use by the public apply to different types of public space. Our city streets are public space, but most of us recognize (sometimes begrudgingly) that much of this public space is set aside for car storage. We feed the meter in order to occupy these public parking spaces. In contrast, many people assume that our public parks are spaces that should be open to all members of the public, for use by all members of the public, without cost, and perhaps even at all times of day. We know, of course, that this is not necessarily true. We often need permits to protest, and we can’t lie down and take a nap on a park bench in many places. But our “sense” of public parks is that they represent something truly public – perhaps even more public than the sidewalk, and certainly more so than the asphalt-paved street.

This is why it is confusing and perhaps concerning to see the occupation of our public parks by private, for-profit entities. In many places, people lead yoga classes or boot-camp courses in public parks, but only paying patrons may join in. And here in Portland, I recently noticed that a small corner of Congress Square Park – the park that was the subject of a city-wide referendum to limit the sale of public parks – has been graded and is now being used as outdoor seating for the hotel restaurant that is adjacent to the park. 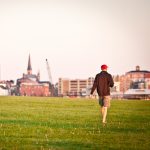 Perhaps this privatization of our public space is not concerning to most people. Indeed, many would argue (convincingly) that the restaurant will bring additional life to Congress Square Park by activating a dark and somewhat underused corner of the public space. (Further, the park is slated for redesign in the not-too-distant future.) In Portland, the same section of the city code provides for the issuance of “revocable outdoor dining permit[s]” on streets, on sidewalks, or – for a bit more money – in parks. Thus, the City appears to have considered and decided that it is appropriate for private entities to occupy space for dining in parks. And maybe that’s ok. However, some have referred to the intrusion of private dining spaces into public parks as “café creep,” and the concern is, where does this stop? What percentage of our public space should be dedicated to private, paying users? Here, we might think more broadly about privatization, as well as public space. What value do we seek to obtain from our public goods? By issuing permits to create more lively and active spaces, are cities inadvertently creating exclusionary spaces? Who benefits from the privatization and who is excluded? Is public space ever truly for everyone? These are all questions to think about, and talk about, the next time you’re enjoying a meal al fresco on one of these gorgeous Maine summer days.