The Pandemic of 2020 underscores the importance of science for everyone. COVID-19 appears to have terminated the anti-science moment that emerged in 2016. Nearly everyone now accepts that physical reality is a fact, even when we cannot see it. This moment is the revenge of the expert — scientists, technocrats, intellectuals – the genuinely credentialed. Nothing raises the demand for real knowledge so much as a crisis.

Scientific knowledge is an important arrow in the quiver of a lawyer. When Oliver Wendell Holmes, Jr. was Associate Justice of the Supreme Judicial Court of Massachusetts, he delivered an address to the New York State Bar Association. Reflecting on the intersections of law and science he observed,  “I have had in mind an ultimate dependence upon science because it is finally for science to determine, so far as it can, the relative worth of our different social ends…”[1] Holmes believed that scientific facts were the basis of the authoritative decision-making that generates policy and law.

What does this suggest for current and post-pandemic legal education? It means the developing jurist should acquire an acquaintance with scientific thought and method. Like many law students, my pre-law education was not in science, it was in government. After law school, I became acutely aware of the relevance of science to law when I was retained to advise the World Health Organization (WHO). This international lawyer interacting with physicians, scientists, and public health experts was suddenly plunged into world health law. Later, I had an opportunity to return to student life and I enrolled in courses on the intersection of law and science. 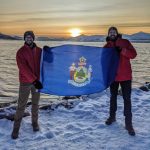 Numerous fields of law touch on some aspect of science – contracts, criminal, evidence, property, business, administrative, environmental, medical malpractice, intellectual property, maritime/oceans, international law, privacy, and so on. Students who elect to become acquainted with science can add value to their study of law. There are STEM courses across the University of Maine System in which students may enroll for credit or to audit. Some are available online. The Climate Change Institute (CCI) sponsors open lectures on physical, biological, and the social sciences.[2]  Our students can pursue interdisciplinary independent research, fellowships, externships, and internships that provide opportunities to work on science-based legal problems. Our Arctic Law Fellows program requires familiarity with relevant science. A new course offered this Spring, “Interdisciplinary Research in the Arctic,” included science modules and was offered online, live, and was available for credit or audit. And, the new University of Maine Graduate and Professional Center aims to support cross-disciplinary law and science education that bridges business and public policy. Thus, the silo that constrained legal education is dismantling.

The aim of incorporating science into legal education is not to achieve technical competence in a specific field. The aim is to acquire an understanding of scientific thinking applicable to questions of law. As Professors Myres S. McDougal and Harold D. Lasswell observed, “[e]ffective training in scientific thinking requires that students become familiar with the procedures by which facts are established by planned observation. . .  [T]he policy-maker needs to guide his judgment by what is scientifically known and knowable about the causal variables that condition the democratic variables.”[3]

There are good reasons for law students to embrace science. First, they will be more effective lawyers, policy professionals, entrepreneurs, and business executives. Second, they will have additional employment power. Many businesses, law firms, and organizations value a basic scientific skill set. Universities hire research compliance specialists, science organizations including the National Science Foundation (NSF), environmental and human rights NGOs, international organizations such as WHO, the United Nations Environmental Program (UNEP) and the World Bank all look for law graduates with at least a passing knowledge of science. And, if you want to counsel the Maine beverage industry, be aware that brewers know chemistry. Third, students will graduate with an enhanced credential for uncertain times. They will be better prepared for the next pandemic.

When Sir Charles Snow (C.P. Snow) delivered his famous lecture at Cambridge University, The Two Cultures and the Scientific Revolution [4] he spoke of scientists and humanists – two groups that rarely communicated and when they did it was at cross-purposes. For years one could replace “humanist” with “lawyer.”  Today the two cultures are interdependent. Lawyers guide scientific product to market and can ensure that governance and regulations are based upon sound science. Through science, lawyers can better understand the facts and evidence at the core of so many legal problems. In this age of contagion, Secretary-General of the United Nations António Guterres has been worried about the growing scourge of pandemic misinformation. In a recent communiqué he declared, “First, trust in science. This is a time for science and solidarity.”[5]  This is also a time for law students to embrace science.

[2] And each time I deliver a science policy lecture at CCI, I am reminded that scientists appreciate lawyers.