Jeff Thaler is the Visiting Associate Professor of Law at the University of Maine School of Law, and the Associate University Counsel for environmental, energy, and sustainability projects for the University of Maine System. He has developed and taught the following courses:  Renewable Energy Law, Energy Economics and Law, Administrative Law, Legislative and Administrative Law, Toxic Torts, Climate Change Law and Policy, and a new Administrative Law Practicum that has received national attention. An article on the development and implementation of the Practicum was published in the Maine Law Review, and was the subject of a chapter in the 2017 book, Experiential Education in the Law School Curriculum. He recently worked with national administrative law faculty to co-author amicus briefs in the U.S. Supreme Court and the First Circuit Court of Appeals. He also recently developed one of the only courses in the U.S. that combines Trial Practice and Evidence.

In August and September 2019, Professor Thaler was placed as a Fulbright Program Specialist at Duke Kunshan University’s Environmental Law and Policy Department in Kunshan, China. When he returned to Maine, he wrote a Faculty Research Blog about his visit.

Before joining the University, Professor Thaler developed over several decades a wide-ranging legal practice focused on environmental and energy permitting, compliance, enforcement, and litigation; as well as litigation for clients with commercial, medical and legal disputes, and insurance coverage, personal injury and toxic tort problems.

For many years Professor Thaler has been recognized by Best Lawyers in America for his work in environmental and natural resources law, commercial litigation and appellate law, by Chambers USA for both his environmental and litigation practices, and by New England Super Lawyers for his environmental work. In 2010, he was elected the 3rd President of the American College of Environmental Lawyers, a prestigious organization for which he also is a founder and charter member. Professor Thaler is the 2007 recipient of the Justice Louis Scolnik Award for his many years of pro bono civil liberties litigation work. He also represented a family, pro bono, who had lost their father in the collapse of the World Trade Center on September 11, 2001.

Professor Thaler has been permitting counsel for on-and off-shore wind projects and hydro power and wood-to-biofuel facilities, as well as many other commercial development projects; he continues as the attorney for UMaine’s floating deepwater wind projects. He is the author of Fiddling as the World Burns: How Climate Change Urgently Requires a Paradigm Shift in the Permitting of Renewable Energy Projects, 42 ENVTL. L. 1101 (2012), and is also the lead author of The Maine Environmental Handbook and the recent LexisNexis Treatise, Treatment of Greenhouse Gases Under the National Environmental Policy Act. He also is a founder and has been co-chair of the Environmental and Energy Technology Council of Maine, the state’s leading organization for that growing sector of Maine’s economy.

In his litigation practice, Professor Thaler was trial counsel in a federal accounting case in which the jury awarded his client over $6.6 million, one of the largest such verdicts in Maine. He also has been lead trial counsel in a number of other cases resulting in seven-figure settlements, and has successfully defended many attorneys, law firms and business in state and federal courts, and served for over a decade, including as Chair, of the Maine Supreme Court’s Advisory Committee on the Code of Professional Responsibility.

In 2006-07 Professor Thaler created, and directed annually, a nationally-unique program for Williams College students entitled Resettling Refugees in Maine, where the students each live for over three weeks with a refugee or immigrant family and work with service providers. In 2015 he piloted the program at Colby College, and a shorter version in 2016 at Waynflete School in Portland. (View Professor Thaler’s TedXDirigo Talk about the program.)

The Seas Are Changing: It’s Time to Use Ocean-Based Renewable Energy, the Public Trust Doctrine, And a Green Thumb to Protect Seas From our Changing Climate, 19 OCEAN & COASTAL L.J. 241 (2014) (with Patrick Lyons). [SSRN] [PDF]

Greenhouse Gas Litigation and NEPA: A Split in the Courts, 43 TRENDS, May/June 2012.

Economics vs. The Environment: Finding the Balance, PROFILE MAG., Mar. 1993. 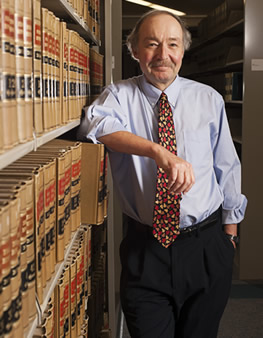