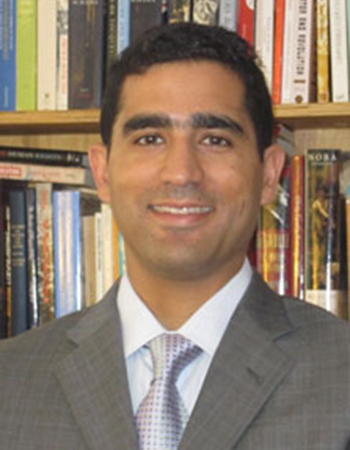 Malick Ghachem is a leading scholar in the law of slavery and race, and an expert in early French colonial and American legal history. He is an associate professor of history at the Massachusetts Institute of Technology and a senior scholar at the University of Maine School of Law.

Professor Ghachem is the author of The Old Regime and the Haitian Revolution (Cambridge University Press, 2012), which is the first comprehensive account of the role of law in the transformation of Haiti from a slave colony into an independent nation. The book was awarded the 2012 J. Russell Major Prize from the American Historical Association, and was co-winner of the 2013 Gordon K. and Sybil Lewis Award from the Caribbean Studies Association.

A member of the Maine Law faculty from 2010 to 2014, Professor Ghachem taught courses on criminal law and procedure, legal history, and law and religion. Previously, he practiced law in Boston from 2005 to 2010, working primarily in the areas of criminal defense, employment discrimination, and commercial/securities litigation. He holds undergraduate and law degrees from Harvard University and a Ph.D. in history from Stanford University. During 2004, Professor Ghachem clerked with the Honorable Rosemary Barkett of the Eleventh Circuit Court of Appeals in Miami. He has also served as a lecturer in political science at MIT.

Professor Ghachem comments on legal affairs and the Atlantic revolutionary tradition at lawandrevolution.com.

The Antislavery Script: Haiti’s Place in the Narrative of Atlantic Revolution in KEITH M. BAKER AND DAN EDELSTEIN, SCRIPTING REVOLUTION: A HISTORICAL APPROACH TO THE COMPARATIVE STUDY OF REVOLUTIONS (2015). [STANFORD]

A Comment on Christopher Johnson’s “Post-Trial Judicial Review Of Criminal Convictions: A Comparative Study Of The United States And Finland,” 64 ME. L. REV. 477 (2012). [PDF]