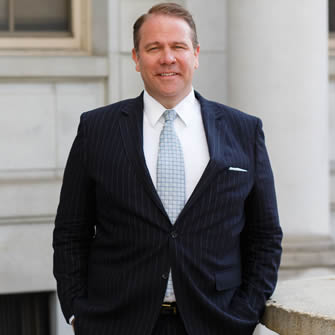 Judge Lance E. Walker is a United States District Judge for the District of Maine. The U.S. Senate unanimously confirmed Judge Walker’s nomination to the federal bench on October 11, 2018. He is the 2019 recipient of the Law School’s L. Kinvin Wroth Distinguished Alumnus Award.

What is your pre-Maine Law background?

I grew up in Milo and Dover-Foxcroft, Maine, where my parents owned a hardware store and travel agency, and my father also was an engineer on the Canadian Pacific Railroad. In a dramatic departure from the family hustle, I studied philosophy at the University of Maine. I explained to my skeptical father that with a degree in philosophy I could do anything. My father queried, “Can you become employed?”

Why did you choose Maine Law?

Former Chief Justice of the Maine Supreme Judicial Court Leigh Saufley ’80 sold me on it. I was living in Maine the summer after completing my first year of law school “away” when she interrogated me about my choice in law schools. It was the first of many times I would appear before her without many good answers to her questions. She emphasized the exceptional faculty and the sense of community between Maine Law and the bar. As always, she was right, and I was lucky.

What is involved in your current work?

When I’m not on the bench presiding over a court proceeding, I spend a great deal of time reading case files and writing opinions, which I thoroughly enjoy. One of the more satisfying aspects of my job is presiding over citizenship ceremonies. Witnessing the joy of new citizens and their families is inspiring. I also get to work closely with my gifted law clerks, Maine Law graduates Marc Veilleux ’99, who serves as my career clerk, and Katie Bressler ’18. John Fogarty ’19 will be joining my chambers soon. I shared with John that when it gets around the federal judiciary that John Fogarty is clerking for me, I will basically be the coolest judge in the country.

Was there a particular Maine Law faculty member who influenced you?

Professor Nancy Wanderer was a great influence. In addition to her remarkable professional skills, Nancy possesses an unusual combination of intellectual honesty, charity of spirit, and grace that should serve as a model to everyone. She chose me to be an instructor in her legal writing program during my 3L year. Nancy made me feel like I belonged at the party; that I had a verse to contribute. And for that I am forever grateful.

Is it true that you own a Harley-Davidson motorcycle? Do you have any other unusual interests?

I ride a Harley-Davidson Screaming Eagle Fat Boy. I’ve been a motorcycle enthusiast for as long as I can remember. I used to ride with former Chief Justice Dan Wathen ’65, but he would often want to swap motorcycles, which made me terribly nervous for my motorcycle. In terms of “unusual” I suppose collecting vintage manual typewriters would qualify.

Why should students consider Maine Law?

In the valediction Professor David Gregory presented at our commencement ceremony, he urged us to “look at reality with a cold, hard, steely-eyed gaze” so as not to corrupt reality. Maine Law trains clear thinkers with critical faculties and sends them into the world armed with the tools necessary to meet it on its terms, and when necessary, to help set the terms. Having found myself in some pretty big rooms of late, I can attest that a Maine Law education travels well.