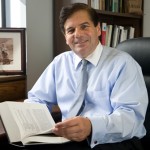 I write from a meeting at The Paul H. Nitze School of Advanced International Studies (SAIS) of Johns Hopkins University in Washington, DC. The subject is the East Sea/Sea of Japan . The participants include ambassadors, government bureaucrats, librarians of Congress, linguists, geographers, cartographers, historians, and two law professors—one from Korea and one from Maine. But in this meeting the critical participants are the toponymists. A toponymist uses the science of toponymy to establish officially recognized geographical names. The word “toponymy” comes from the Greek words tópos (place) and ónoma (name) referring to the place-names of a region or language and the etymological study of them.

This meeting is considering a geographical place name of a body of water that separates Korea and Japan, a hydronym. A hydronym is a wet toponym. It is the geographical designation for an ocean (the Artic), a sea (the Aegean) a lake (Erie) a river (The Nile). And there can be conflicting hydronyms claims: The Persian Gulf or the Arabian Gulf; the Sea of Japan, the East Sea or something else? South Korea is promoting a dual naming solution East Sea/Sea of Japan. Japan opposes. Toponyms and hydronyms are symbols that can convey claims under international law. Claims are informal as well as formal and not always resolved in courts and tribunals. Law is a process of communications that originates as claims clothed in symbols. A toponym or a hydronym can signal an authoritative policy, backed-up by control and accepted as authoritative by one community yet contested by another and thus enters the discourse of international law.

I had crossed this particular hydronym by boat to visit a maritime feature (rock or island depending on your point of view) claimed by both Korea and Japan called Dokdo by the Koreans, Takeshima by the Japanese and Liancourt Rocks by the French. This is another dispute fueled by overlapping toponomical claims and the two are related. It is important to appreciate that toponyms and hydronyms are symbols fueled by collective historical memory that convey attachment, ownership, identity and ultimately claims whose proponents seek the impramatur of law. Hence they often figure in disputes among States.

A hydronym can convey control over water. This problem of access versus control has been an issue in the law of the sea since the 1648 Treaty of Westphalia and the emergence of Nation-States. In 1602 the Dutch East India Company seized a Portuguese galleon in retaliation for Portuguese resistance to Dutch trade in the East Indies. A lawyer named Hugo Grotius was commissioned by the Dutch to write the legal brief in the ensuing case. The brief published in 1609 as Mare Liberum would become the first serious philosophical work on the seas. In Mare Liberum Grotius set forth reasons why the “high seas,” which came to be defined as the open ocean existing beyond national control, must be open for trade and exploration. All property, he wrote, is grounded upon occupation—the sea then, like the air, cannot be appropriated: “Whatever cannot be seized or enclosed is not capable of being a subject of property . . . meaning that the vagrant waters of the ocean are necessarily free.” The alternative view was that the seas and its features were subject to appropriation and occupation. Assigning a name, a hydronym, was a claim of appropriation. Sovereign control over maritime features – toponyms situated within hydronyms—could yield assets from the seas. A geographical name attached to one State might connote control and displace access of other States and ocean users.

The context of this Washington meeting is not only the water, it is also the land features the water encompasses. Across the vast ocean spaces are rocky outcroppings, reefs, low tide elevations and islands. These are called maritime features, a legally neutral term. This term is used because a specific geographic designation would connote a legal conclusion under the United Nations Convention on the Law of the Sea (UNCLOS). Many of these features are claimed by more than one State. There are such claims from the Arctic to the Caribbean, from the Persian Gulf to the Indian Ocean and from Asian Seas to the Gulf of Maine. The claims are intense because with their resolution can come assets from the seas depending upon how the features are legally characterized. They raise critical issues of security, fisheries, the environment, energy, seabed mining, fisheries, and the international law of the sea. There are varying levels of claims in conflict across the oceans but in our contemporary order of the world community these are most intense in Asian seas. Hence this meeting is sponsored by The Korea Foundation, The Korean Hydrographic and Oceanographic Administration, US Korea Institute and the Society for the East Sea each promoting toponym and hydronym claims.

The maritime boundary between Korea and Japan remains unresolved and hence the geographical name attached to the body of water separating the states is significant. At the center of the dispute are a set of tiny islets between the two states. They are situated in what the Koreans term the East Sea and what the Japanese call the Sea of Japan and are variously termed Liancourt Rocks, Takeshima and Dokdo – a problem of toponomy. The features are indeed beautiful. Military personnel have been stationed and fishing families have taken up temporary residence. But these islets and smaller outcroppings are barren, rocky, and largely uninhabitable.

The status of maritime features in international law has been crystallized in State practice, in the 1958 Geneva Convention on the Law of the Sea, the 1982 United Nations Convention on the Law of the Sea (UNCLOS) and in key decisions of international tribunals. UNCLOS set the prevailing maritime zones and clarified jurisdiction over zones and activities. UNCLOS was intended to stabilize expectations by formalizing reciprocally beneficial commitment to collaborative behavior. (What should be done about US ratification of UNCLOS will be the subject of a future blog.)

Of the maritime features the most important are islands. Under UNCLOS Article 121(1) islands are defined as naturally formed areas of land surrounded by water which are above water at high tide. The maximum breadth of the maritime zones of islands is similar to land areas along the coast. The territorial sea is not to exceed 12 nautical miles, the Exclusive Economic Zone (EEZ) is not to exceed 200 nautical miles, and any continental shelf is limited to 200 nautical miles as stipulated by Article 121(2) of UNCLOS. There is no minimum size for islands. Rocks are features which cannot sustain human habitation and have no economic life of their own. They are entitled only to a territorial sea and neither an EEZ nor continental shelf. Whether Dokdo/Takeshima is an island or a rock remains a matter of discussion.

International tribunals have articulated methods and rules for resolving sovereign and associated maritime disputes. While the International Court of Justice (ICJ), The International Tribunal Law of the Sea (ITLOS) and arbitral tribunals are critical for potentially resolving maritime claims, tribunal proceedings are one phase in the assertion of state competence over the authority and control of ocean zones and territory. The delimitation process begins with events, incidents and coastal state demands usually associated with a naming (toponomy or hydronomy) claim. Thus Korea claims that the hydronym is not only the Sea of Japan but also the East Sea, and the disputed toponym is not Takeshima but is Dokdo.

Geographical names are associated with history and in northeast Asia the past remains painful. Korea was occupied by Japans from 1910 to 1945. Koreans faced marauding Japanese wokou pirates and a brutally waged imperialistic war. As early as 1905 Japan asserted sovereignty over the islets. Since 1954 they have been occupied by Korea. Thus contemporary claims to these features and the surrounding waters are embedded in historical events that have left deep scars. The 1965 Republic of Korea-Japan Normalization Treaty established formal diplomatic and economic relations between the two nations and associated agreements were supposed to resolve claims. But they are lex imperfecta. The 1965 treaty is an unperfected legal act having failed to settle many issues from Dokdo to cultural patrimony to wartime sexually enslaved “comfort women.” These matters still overshadow attempts at post World War II Korea-Japan normalization.

In Asia, as a William Falkner character observed, “the past is never dead, it is not even past.” That past continues to generate myths that settle in the collective memory of the community —an accumulation of national experiences, events, and the society’s efforts to revise and redefine those events and experiences. Myth residing in the collective memory can be manipulated by elites and influence the ways in which a society responds to subsequent events. This has implications for geopolitics and international law. Dokdo and the Sea of Japan/East Sea have achieved heightened myth status and loom large in collective memories.

The context of Asian seas includes newly empowered participants, conflicting claims, demands to exploit assets of the seas, environmental risks, access and control of litteral waters, and new ideas about international law as applied to the oceans that are as Eastphalian inspired as are the European Westphalian ideas upon which international law and the law of the sea was founded. Yet the matter of Dokdo/Takeshima/Liancourt Rocks remains unresolved. One party insists that it possesses sovereignty and hence there is no dispute. The other party insists there is a dispute and demands the feature be restored along with marine territory. As for the naming of the East Sea/Sea of Japan the problem from the standpoint of Korea is the appropriation of a critical symbol that expresses an identity. From the standpoint of Japan, supplanting or amending the current hydronym can convey a claim to the marine space and its maritime features. Names are freighted and in the geopolitics of toponymy the stakes can be high. Outcomes can affect the power, wealth and well-being of nations. So what’s in a name?